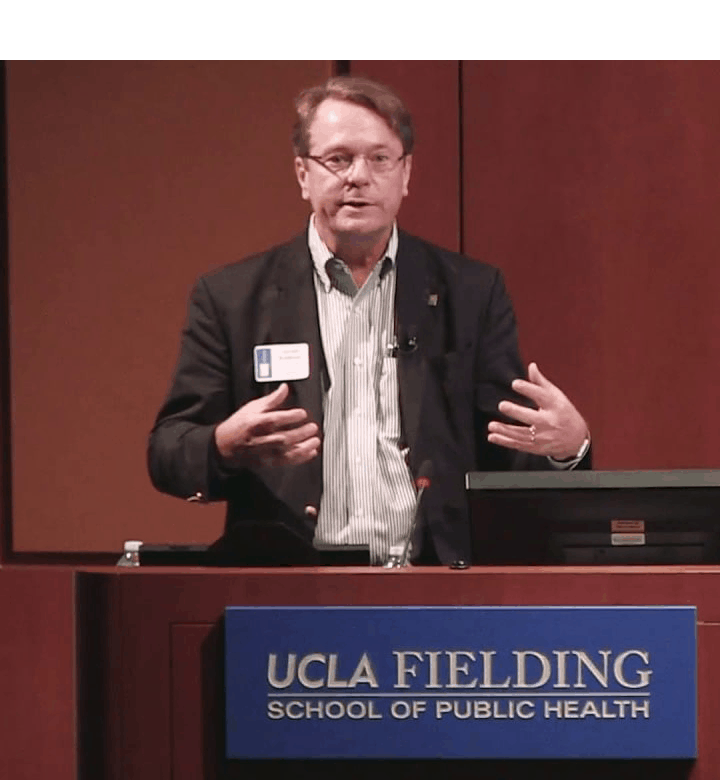 Gerald F. Kominski, Ph.D. was the featured speaker at the Everychild Nancy Daly Memorial Salon on the Affordable Care Act (ACA) held on January 29 at the home of Susan Brauneiss and Mark Gamsin in Brentwood. The salon focused on the ACA and what it means for children in Los Angeles County.

Dr. Kominski is the Director of the UCLA Center for Health Policy Research and a professor at the UCLA Fielding School of Public Health. His current research focus is on evaluating the expected and actual impacts of health care reform.

In his opening remarks, Dr. Kominski told the group of more than 30 that he thinks the worst is over in terms of the problems with the on-line registration process that have plagued the program since it was launched. “We have seen a great improvement in the ease of enrollment since November, and the enrollment numbers are increasing to an acceptable level,” he said.

He went on to caution the group about the uncertainties of the law. “The ACA,” he said, “is an extremely complex law and there are still aspects of the law that, to even to those of us who work with it each day, remain confusing and unclear. We can all expect to see new – but hopefully smaller – problems arise in the future.”

Dr. Kominksi then explained in simple terms the general provisions of the ACA, with an emphasis on who qualifies for health care insurance under the plan and the coverage provided by the Platinum, Gold, Silver and Bronze plans.

Focusing on how children will benefit from the ACA, Dr. Kominksi, said that there are 496,000 uninsured children in California. Of these 325,000 are already eligible for benefits through Medi-Cal and the Healthy Families program. Undocumented immigrant families and their children are not eligible to participate in the ACA.

While the ACA mainly is designed to insure adults, it has greatly increased awareness of the importance of insurance and, in turn, should increase the number of children whose parents sign them up for programs appropriate for their income level.

Other advantages of the ACA for children include the 140,000 children whose families now qualify for subsidies to buy individual policies through Covered California and foster children who are not forced to “age out” of Medi-Cal at age 21 because they are now covered to age 26.

After his formal presentation, Dr. Kominski took questions from the highly engaged audience. A variety of questions were posed which led to a lively discussion between the speaker and attendees that only ended due to the lateness of the hour.